What Are Gate Automation Photocells And What’s Their Function?

Gate motors are used to push and pull swing gates and sliding gates open and closed. The motors used with swing gates are often fixed to the gate close to the hinge, and the arms of underground motors rotate about the hinge point itself. This means that a large force is required to open swing gates thanks to the principle of leverage.

However, the opposite is also true, so a force applied at the open edge of a swing gate can be enormous at the hinge. This is where some of the definitions used in the world of gate automation become slightly inaccurate.

‘Locking’ or ‘non-reversible’ motors are designed to keep a gate in a fixed position if no power is applied to the motor. Trying to push the motor arm to make it move should have no effect. However, apply enough force from its open end with the additional leverage the length of the gate supplies, and the force delivered to the motor is dramatically larger.

This is the point at which something breaks. Either the connection between the motor arm and the gate, or the arm itself, or internal components in the gearbox or motor housing. This is why all swing gates over 2.5m in length should have a separate gate lock installed.

There’s a range of different lock styles, each with its own solution for holding swing gates closed. Some hold the edges of the gates together where they meet in the middle. These can be CISA hook locks or magnetic locks (maglocks). Others will lock the gate into the ground and some have mechanical operation.

CISA locks are mounted on the inside of the opening edge of one swing gate and the latch is mounted to the other gate in the corresponding position. When the gates are closed, a hooked metal lever in the lock hooks over the latch and secures the gates by holding them together. 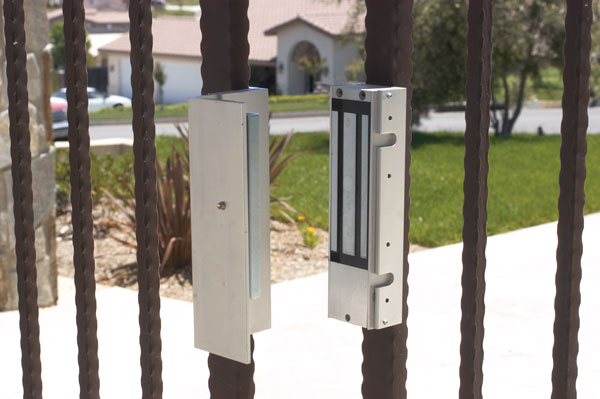 Maglocks apply the same technique of holding the opening edges of swing gates securely together. However, unlike CISA locks, the principle used to hold the gate is magnetism. On one gate’s opening edge a steel plate is mounted.

In the corresponding position on the opposite gate, an electromagnet is installed. This is powered to create the magnetic attraction to hold the lock to the steel plate and lock the gates. Cutting the power supply, removes the magnetic force and the gates can open. 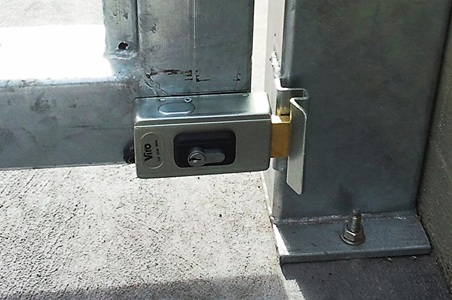 Lever locks function in the same way as most ‘Yale’ style door locks. A lever in the lock unit slides into a corresponding aperture in the latch and holds the two together.

These can be electromechanical and supplied with a physical lock and keys. Using the keys to unlock the latch overrides the electrical operation. In electrical and manual operation, the lever is withdrawn from the latch to allow the gate to open.

Bolt locks are usually electromechanical and work on the same principle as lever locks but use a sliding bolt that often anchors into a latch in the ground. These can also incorporate manual operation with locks and keys.

Manual locks are most frequently bolt type locks with some spring-loaded to ensure the bolt engages sufficiently to lock the gate.

The advantage with powered locks is that they are wired into the gate controls. When power is applied to open the gates, a signal is also sent to the lock to disengage it just before the gate starts to open. Conversely, the lock engages once the gates are in the closed position. Manual locks and latches, must be disengaged by hand before the gates can be opened automatically.

In most cases, gate locks are not primarily designed for security. The entire property perimeter needs to be secured before gates can even be considered part of premises security. Additionally, the opening edges of swing gates sometimes have enough play in them to be lifted enough to release lock bolts securing to the ground.

Automated gates provide a way of keeping animals and children inside a property, and law-abiding people outside the property. A determined criminal should be prevented from gaining access to buildings rather than grounds.

Automatic gates with ‘locking’ motors do not require huge forces at their open edges to push open. Anyone in a vehicle who is not too worried about scratching their paintwork can push unlocked gates open. The cost of adding a gate lock to reduce the possibility of this is significantly less than the cost to replace expensive automation equipment.

Thanks for sharing the amazing blog. I read it twice because of useful information. If anyone wants to know about the role of Safelocks please visit the websit