Electric Gate Safety In The UK

There have been a number of accidents and even fatalities in the UK in recent years. Organisations such as Gate Safe and the Door & Hardware Federation (DHF) give advice and campaign for gate safety awareness within the industry, and the HSE provides advice based on the Machinery Directive and British Standards.

The creation of an automatic gate from the component elements of gate or gates, automation equipment and other accessories such as the gate leaves, safety devices, locks and access control equipment creates a new 'machine' from these elements. The Machinery Directive says that a newly created machine must be CE marked by (in the instance of gate automation) the installer.

For most domestic installations, gates swing or slide open and closed. This creates a number of possible risk types based on how the gate moves through its surroundings and relative to pillars and posts, other gates and fences, walls and railings. These risk types cause injury types including impact, crushing, drawing in, hooking, cutting and shearing.

The intent of any safety audit, safe gate design, regulation and recommendation is to: 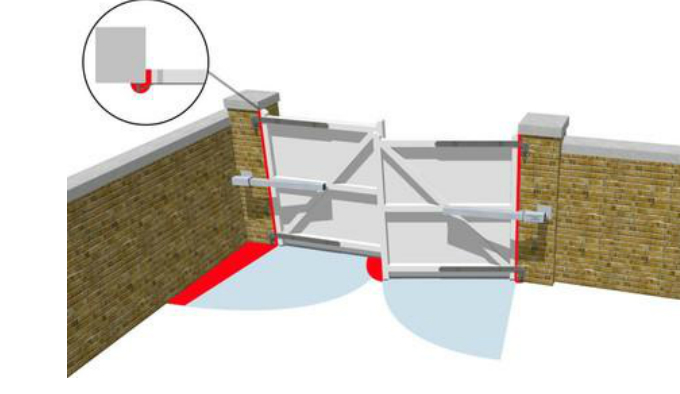 2: Prevent access to the areas where the risk can be present or created

3: Educate users to the potential dangers.

There are however, many instances where a gate is accessible to untrained users so the first two methods of risk prevention are always more effective. As the breakdown of gate motors or the physical components such as hinges can leave a gate unsafe, physically removing and preventing access to risks is the ultimate goal of safe automatic gate design.

There is a set of British Standards that specifies the minimum requirements for a safe automatic electric gate.

BS EN 12453:2001 which recommends a minimum level of safeguarding against the crushing hazard at the closing edge of the gate depending on the type of environment in which the gate is operating. The Standard defines 3 types of use:

Type 1 - The gate is only used by trained users and there is no intended, inadvertent or unauthorised access to it by members of the public.

Type 2 - A limited group of persons (for example persons sharing a block of flats) are trained to operate the gate and the gate is located in a public area.

Type 3 - Any person is free to operate the gate and the gate is in contact with the general public.

The Standard advises on the minimum levels of safeguarding of the main gate edge according to its type of use. As Type 1 gates are controlled and operated by trained users, they are not covered in this safety notice because the gates are not located in the vicinity of the general public.

But Type 2 or Type 3 gates that have automatic control are accessible to untrained individuals including children and the elderly who may not understand the possible risks and put themselves into harm’s way with an unsafe gate. The Standard, therefore gives advised level of safeguarding as follows:

2)      Provide ‘obstacle detection’ that recognises the presence of a person or an obstacle standing on the floor at one side of the gate.

The best solution is a means of detection that ensures that no-one can be touched by the moving gate leaf.

The Machinery Directive itself describes what needs to happen with regard to the assembly of components into a new machine and the paperwork and CE marking that is prepared by the installer creating the new machinery.

The list of Standards provided by the HSE includes:

7. BS EN 12635:2002 Industrial, commercial and garage doors and gates. Installation and use (harmonised).

A significant factor requiring consideration when automating gates is the weight of each gate leaf. A larger, heavier leaf requires more power to open and close it to overcome the forces acting on that gate. These include the inertia of the gate itself and air pressure which will vary greatly depending on wind speed acting on the leaf faces.

As the force required to open and close a heavier gate is increased, so is the potential force that can be exerted on anything coming into contact with that gate while it is moving. This is a perfect example of a risk where impact and crushing avoidance is highly desirable.

The choice of gate automation motors plays a large part in the forces required to operate an automatic gate. A automated gate system is effectively a lever and fulcrum and operating the gate as far from the fulcrum (hinge) as possible reduces the force required to open and close that gate.  Ram style gate motors are mounted on gate posts, pillars, piers etc at one end and attached to the gate some way from the hinge. This allows the motor to operate the gate with less force than a motor attached to the gate closer to the hinge.

Articulated arm motors are attached to the gate closer to the hinge but their design (a jointed metal arm carries the force from motor to gate) usually means they are used on lighter or smaller gates.

Underground motors operate from enclosures dug into the driveway under the base of the gate nearest the hinge. As such, they are opening and closing automated gates from the point closest to the fulcrum and require the highest force to overcome gate inertia and air pressure. So, while underground motors are very popular in the UK due to their discrete installation, they potentially create higher risks than comparable ram and articulated arm motors.

Articulate arm motors also present a risk due to their design. The articulated arm itself creates a gap between itself, the gate post or pillar and the leaf when the gate is closed. As the gate is opened, this gap closes up and creates a risk of trapping, crushing and shearing injuries.

Not as well known in the UK is the powered wheel gate automation system is mounted on gates’ leading edges so less force is required to operate the gate.

Swing gates should never be installed in a way that allows the edge of the gates nearest the pillar or post on which they are mounted to create a gap large enough to allow personal access. This can include reaching through the gap from the outside to access a gate control such a push button switch. As the gate opens, the gap between gate and mounting can close up and trap the individual.

Sliding gates with an open boarded design present the risk of shearing accidents if they slide against railings. Leading edges sliding against fixed points also create this hazard and crushing risks.

Swing gates with a close-boarded design require significant force to open or close when a strong wind is blowing on them. This is affected by the size of the gates with larger leaves offering a greater surface area for the force of the wind to push against. It is possible to increase the force of the gate motors to overcome this but by doing so, the installer increases the force acting on any object or person caught by gates installed without satisfactory safety considerations.

Similarly, the force required to open a long leaf swing gate by pressing on the opening end can damage gate motors and hardware but also present a dangerous situation for someone trying to squeeze through gates like this. Long gate leaves (above 2.5m) should always be installed with a locking device such as a magnetic lock (Mag Lock) that will release if the power is cut.

Manual release devices should be incorporated into any automatic electric gate design and users of the gates should be trained on their use and know where manual release keys can be found. If anyone does become trapped, the force from the gates acting on them can be released quickly.

There are many potential risks created with gate automation and each case should be dealt with individually with a thorough safety audit. This will allow all potential risks to be considered within the scope of the gate use and the access it affords to limited trained users or untrained members of the public.

Only when the full implications of proposed gate design, gate automation system and user knowledge are understood can the Standards and recommendations be applied and a safe automatic electric gate system be designed and installed.

The stages of a thorough risk assessment for a new or existing (where additional safety measure may be retrofitted) electric gate installation are as follows:

Step 1: The scope of the use of the gate, who will come into contact with it and what physical components, their location and the environment of the automatic gate are considered. This allows the parameters for the risk analysis to be established. This stage should also consider the possible misuse of the gate by the untrained and those unaware of potential hazards created by the machinery.

Step 2: Once the parameters for the gate structure, location, components and operation have been considered, all the potential risks need to be understood and catalogued. This covers all stages of the gates life from installation and commissioning, operation, maintenance and disassembly.

Step 3: Once the potential risks that could exist within the parameters of the specific gate’s existence are understood, these risks should be prioritised based on how severe any injury they cause could be and the likelihood of that risk occurring. Once a hierarchy of risks has been established, the appropriate level of risk mitigation or elimination is determined. This is based on a scale that ranges from risk elimination to safe and fast release from the hazard as follows:

a: The risk is eliminated or reduced by the design of the gate automation system.

b: The risk is reduced by the application of safety devices added to the system.

c: Where it is not possible to incorporate a or b, warning signs and safety instruction are provided clearly for all users of the electric gates.

d: Measures for fast and safe release from the hazard are incorporated.