What Are Gate Automation Photocells And What’s Their Function?

Automatic gates open and close when instructed by a variety of methods. Remote transmitters are carried by gate owners to operate their gates at the push of a button on the remote. Access control systems use gate release buttons inside the property to open the gates. And keypads or proximity readers installed outside the gates allow access for anyone with the code or programmed proximity tag.

It is also possible to bury a loop cable in the driveway inside the gates that operates the gates when a vehicle passes over it.

Under normal conditions, automatic gates open when instructed to do so and then close after a certain period of time.

However, moving gates should not be allowed to hit anything or anyone, so a way to tell them that something is in their path is needed. This is what safety photocells are for.

Photocells come in pairs and function by sending an infrared beam from one to the other. If this beam is broken, the photocells send a signal to the gate automation control panel. This signal usually tells the gates to stop and to fully open.

Arriving at Automatic Swing Gates from the Outside

If gates are closing and a vehicle arrives from the outside, the outside photocell beams is broken, and the gate stops closing and reverses to open the gates and prevent them hitting the vehicle. 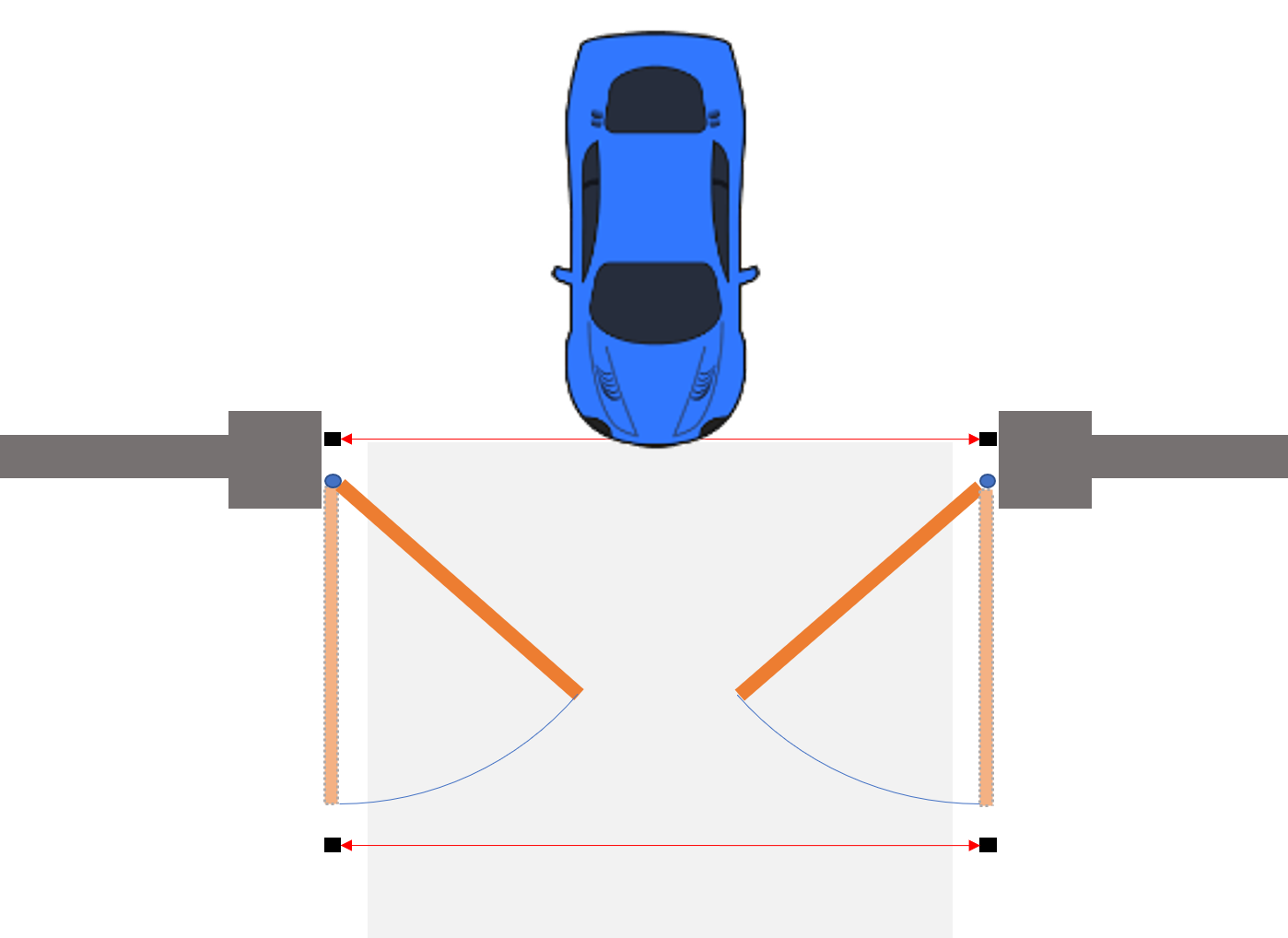 Arriving at Automated Swing Gates from the Inside

Vehicles approaching open gates from the inside as the gates are closing will break the inside photocell beam and stop the gates closing. They reverse and open fully allowing the vehicle to pass through. 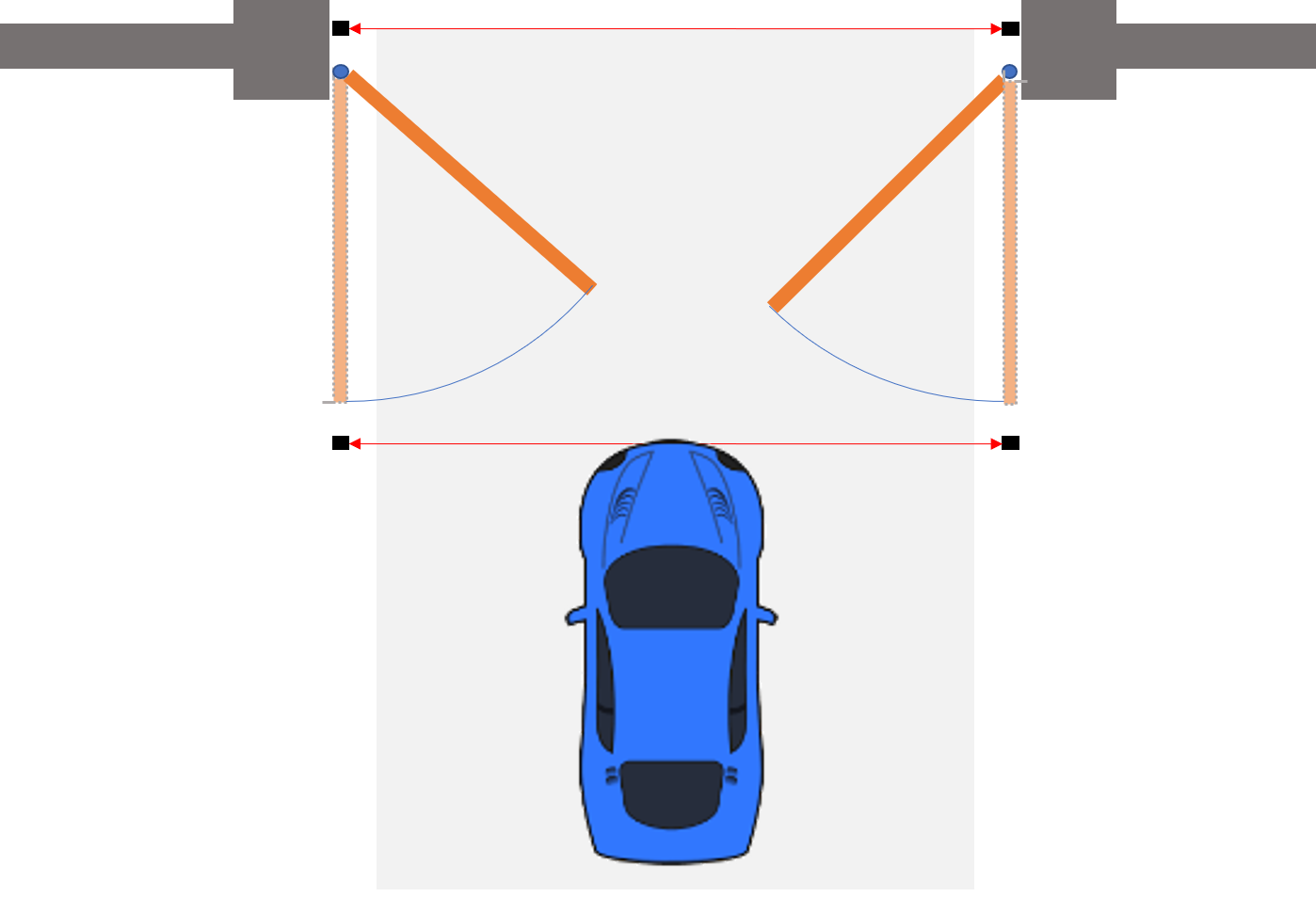 The time delay set to keep gates open after a beam is re-established is important where slow moving smaller vehicles or pedestrians pass through gates. This is because at some point the person or vehicle will not be breaking either the inside or outside beams. Where long gates such as a single 5-bar gate is installed, even a car can be in a position where it is breaking neither beam.

The potential danger this situation creates can be reduced by adding safety edges to the gates. The gates will then stop and reverse if they close on an object between the inside and outside photocell beams. Installing 24V gate motors with obstacle detection will achieve the same result. However, this does involve contact with the gates.

One alternative is to install latching relays which latch the gate open when one set of photocells’ beams is interrupted and only release the open latch command when the relay on the second set of photocells is activated by breaking their beam.

Once the vehicle or pedestrian breaks the inside beam, the gates will be kept open until they pass through and the beam is no longer broken.

It may be considered obvious that any delay between unbroken photocell beams will cause the gates to close. However, while the homeowners can be educated to this risk, visitors who have no experience with automatic gates will not be aware of the possible dangers and the workings of automatic gates. Consequently, it is always vital to reduce any possible risk with safety equipment or by preventing access to danger areas.

One final solution for removing pedestrian access to possible risk areas in gates designed for vehicle access is facilitated by the installation of a separate pedestrian gate. This can be locked with an electric lock that can be released through the access control system used for the automatic gates, but the gate itself will be manually opened and closed.

Automated sliding gates slide along the property boundary when opening. Ideally, photocells should be installed along the full travel path of sliding gate.

There is a possibility of shearing and trapping injuries where the gate slides against the edges of walls and posts or across open railings. This means that safety photocells on the inside of the gate must accommodate the full travel of the gates to stop the gates moving if it is possible for anyone to enter the danger area.

By installing a pair of photocells just outside the gates, anything that breaks their beam when the gates are closing will stop and open the gates.

The photocells installed inside the gates stop and open closing gates when anything breaks their beam.

Can Photocells be used for Egress?

As gates stop closing and open when the beam inside the gates is broken, photocells could be considered as a cheap option for egress control. However, this is not recommended, as it is possible for animals including pets or birds to break the inside beam and cause gates to open at undesirable times. Therefore, safety photocells should be used as just that, safety devices. Their role is to prevent gates from closing onto people or vehicles.

The egress function for anyone wishing to open gates and exit the property should be performed by alternative methods such as loop detectors or push to exit buttons.

A loop detector comprises the detector itself and a loop of special cable. The cable is buried in the driveway and opens the gate via the loop detector when a vehicle passes over the loop. These are highly reliable and long-lived and represent one of the best ways to operate gates automatically from inside the gates. The only real downside is that a channel for the loop has to be cut in the driveway and filled with (usually) bitumen, or the loop is installed in the foundation of a new driveway.

An egress button is placed next to the drive inside the gates (sufficiently far back from swing gates to allow them to fully open) and is simply pushed to open the gates and allow anyone the leave the property. It is essential that egress buttons are not positioned near enough to the gate that it is possible to reach through the gates to operate the push to open button. This is extremely dangerous and there have been significant injury and death caused to people trapped by opening gates they have opened by reaching through the gates to push the release button.

The most common combination of two photocells is a transmitter and receiver. The first emits the infrared beam and the second detects its presence. Alternatives include photocells that transmit an infrared beam at a mirror ‘receiver’ that reflects the beam back to the transmitter to also receive the signal. However, these should only be used for egress and not for safety.

When choosing photocells, transmitter and receiver pairs are preferable as direct sunlight and rain can affect the efficiency of reflector types.

Photocells are a vital part of gate automation safety and their positioning determines a large part of how safe automatic gates are. In all cases, a safety audit determining the type of gates, their environment, gate use, frequency of operation and user knowledge must be carried out at the design stage. This will determine possible risk areas and the types of potential risk. Safety photocells can then be positioned to cover danger areas. Their primary role is to stop gates continuing to move dangerously when someone or something has entered a risk area and broken an infrared photocell beam.

Another important consideration with photocell installation, is their height off the ground. Various posts and columns are available for photocells and many position the photocells at a height of around 600mm. Any lower than this and the beams may pass beneath taller vehicles such as 4x4 pick-ups. Any higher and the beams may pass through the windows of low sports cars or completely over the top of convertibles with their tops down.

If you want any advice or further guidance on installing photocells, call Linkcare on 01895 232 626.

Dear Sir/Madam, I had a sliding gate automated, but the problem is if you stand direct on the rail of the gate, the gate would not stop. The gate will stop when you're 6 inches away from the railing. Does it mean that the beam of the photocell is incorrectly set. Your kind advice would be greatly appreciated.

Should have a safety edge on the closing edge

Do you barrier training courses

I Friggen love when i come across something and i go 'what the hell is that?' and then i find a great article that explains it!Thanks for the clear diagrams as well, helped to visualise it.Jack.

My sensors stopped working, if I fit new universal sensors,do they need reprogramming?

HiPlease call us on 01895232626 to discuss. It depends on what system you have. Analogue cells are unlikely to require reprogramming, and bus (2 wire) photocells may need it