When it comes to installing gate automation, there are many things it is advisable not to do. Safety issues have to be considered, and the installation needs to be capable of dealing with the specified workload based on the gates’ weight and operation cycle (number of times and frequency of gate operation).

However, the installers we work with regularly send us images of working practices they encounter when called out to repair or service another installer’s automation system.

We’ve collected a few of these horror stories here so that you can see what your gate automation installer should not be doing.

Some of the following are merely bodges resulting from laziness, and/or lack of the right part or the right knowledge. Most are not dangerous, but some can be safety hazards, particularly where the bad practice involves electrical supply or safety features.

Here are some of the specific issues that it is important for less experienced gate automation engineers to learn from. 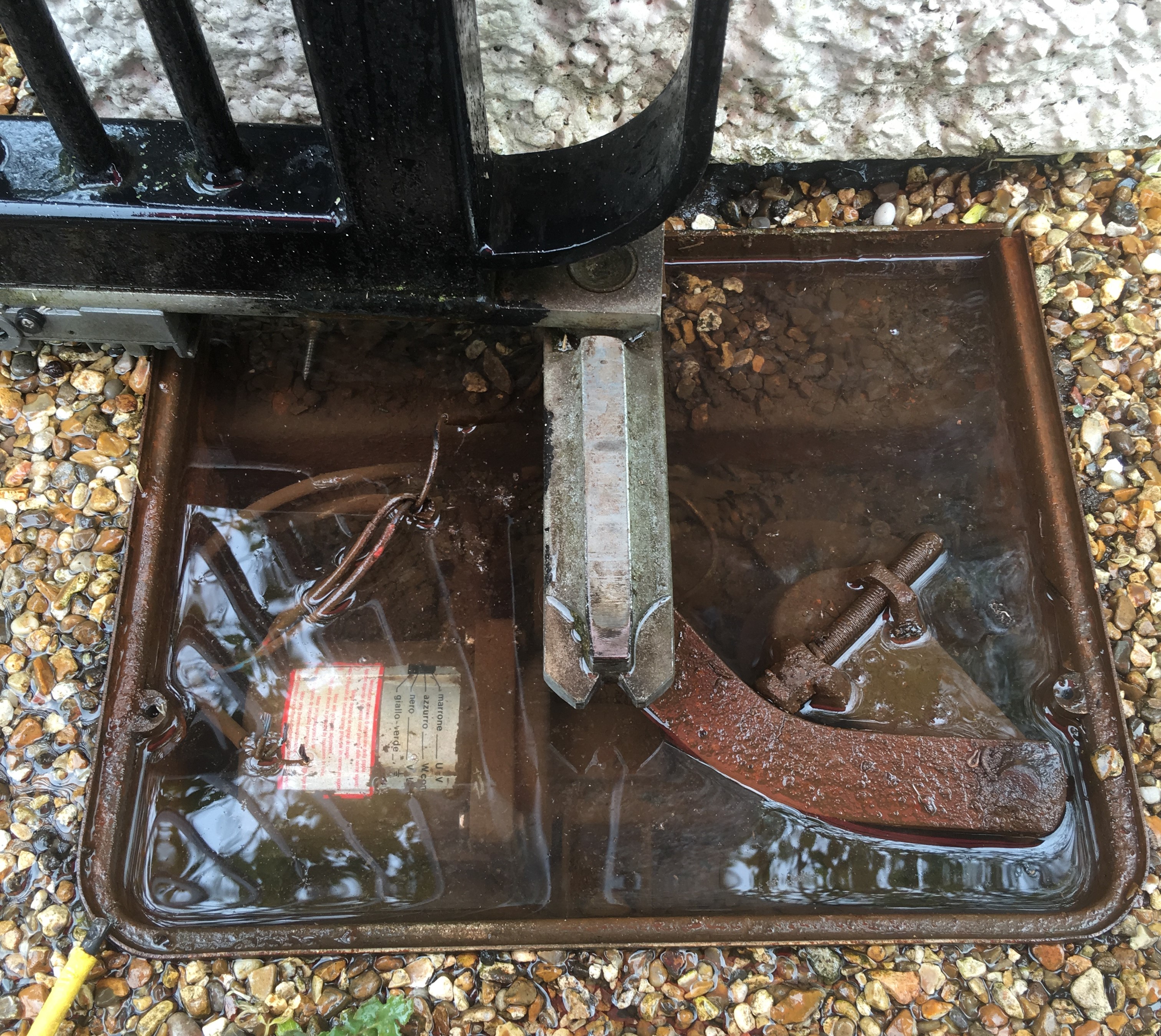 Underground motors are great for homeowners who want discrete gate automation. The motors are situated underground so are hardly visible. All that can be seen above ground are the motor housing cover and motor arm attached to the underside of the gate.

But electric motors are not designed to sit in water for any period of time. Therefore, underground gate motors need to be installed with sufficient drainage to keep their housings free from standing water.

Insufficient drainage and subsequent immersion in water for more than half an hour means gate motors have to be replaced and the drainage situation addressed to prevent the problem reoccurring.

The image shows how bad this can get when an inexperienced installer didn’t get it right. Not only has this motor housing filled to the top with water, it’s also frozen.

Unsurprisingly, this motor did not survive this treatment.

Any underground motor is supplied already wired to a length of cable that is long enough to allow it to be connected to a power supply above ground.

Because underground motors sit in boxes beneath ground level. Water will pass into and through the box when it rains. Even with the best drainage, water may still pool for a short time in heavy rain.

At the motor end, the cable passes through a waterproof seal into the motor casing installed at the factory and guaranteed by the manufacturers.

The other end is ideally connected to the power supply inside the control panel cabinet.

In the images here, the power cables have been cut short and connected to the power supply inside the underground boxes. Attempts at waterproofing them have been unsuccessful and the motors have shorted out when water got to the connections.

These simple wiring mistakes will cost the owners the price of new motors and their (correct) installation.

These Faac linear Hydraulic motors should have been simple to install but the picture shows otherwise. Instead of using the appropriate brackets to allow the motors to work properly with the the gates, small brackets have been used causing the motor ends to meet the gates.

Rather than change the brackets, the installer of these high quality motors chose to cut their ends off.

The second bracket issue we’ve got shows what happens when the post the motors have been hung on is inadequate for mounting the motor brackets.

Here, the section that is welded to the post has damaged the gate and had to be cut to prevent further damage.

But then, not one, but two additional brackets have been bolted together to get the right mounting point for the Nice Toona linear screw motor.

Presumably, the mounting on the gate itself necessitated the positioning of the hinge end of this motor.

However, by moving the gate mounting closer to the wall, a much more suitable anchor point for the hinge end of the motor could have been used with appropriate bracketry.

Ideally, the wiring from an electric gate automation system control panel would be neatly laid out and clearly labelled to facilitate this.

Can you imagine what the installer who uncovered this mess thought when called to repair a gate issue.

All cables in the control panel should be neatly dressed and labelled to allow for easier fault finding and to prevent cables being dislodged form terminal blocks.

The safety edges applied to these gates had been made up of shorter lengths connected together. Rather than buying suitable lengths and cutting them accurately, this installer obviously felt that he could get away with using shorter lengths left over from previous jobs.

The performance of safety edges is critical to the safety of the entire gate automation installation. They must be installed correctly and be properly fitted to prevent water ingress into areas where water should not go.

Failure of a safety edge may lead to an inconvenient stopping of the gate, or in the worst scenarios could endanger people’s lives.

Sliding gate motors are supplied with a base platform that is bolted to J bolts sunk in concrete foundations. In this case, it appears that the motor itself is sunk into the pile of concrete.

Not only is this unsightly and not possible to fine tune the motor’s positioning, it looks like it’s also impossible to access the internal mechanicals of the motor without chipping away at the concrete.

At Linkcare we work with a large number of recommended gate automation installers and can provide the details of one local to you. So, if you’re thinking of having existing gates automated or adding automated gates to their home, or you need gates serviced or repaired, we can help.

Call Linkcare now on 01895 232 626 if you want to be put in contact with a recommended electric gate installer in your area.