What Are The Different Types Of Communication Technology Used For Access Control Systems?

There are a few different technologies that access control equipment at your gates and the handsets and gate releases inside the property use to communicate with each other.

Before we describe these, here’s a brief outline of what elements comprise gate automation access control systems and what functions they have. 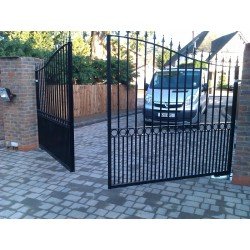 Access control systems for automatic gates allow visitors to let the homeowners know they wish to enter the property, and the homeowners to allow or deny access.

The components that make up such a system start with the minimum requirement of a buzzer at the gate and a gate release inside the house.

The gate buzzer is heard inside the house and the homeowner chooses to ignore it or allow the visitor through the gate using the gate release. 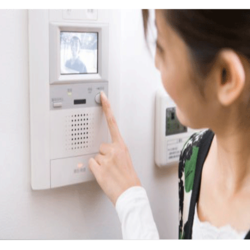 If the gates are not visible from the house, an intercom system that allows the visitor to speak to the homeowner would include a call button and speech panel at the gate and a telephone handset and release button inside.

Finally, video intercoms allow the visitor to be seen as well as heard. The gate panel has a speech unit and a video camera and the handset or handsets inside the house have a video screen.

These are the basic configurations for access control and intercom systems but there are plenty of variants. Some are used with residential systems but are much more common in industrial applications.

Proximity readers are programmed to only allow access to anyone with a programmed tag or keycard. These are great for allowing access to a larger number of people and keeping a record of when individuals arrive and leave.

Finally, biometric systems read fingerprints or scan the iris or retina. The latter are expensive and generally used for indoor, high security environments.

As most gate-side elements of an access control system are outdoors, they have to be waterproof. They can also be specified in vandal-resistant versions in many cases.

How Do The Components Communicate With Each Other?

There are a few ways that this is achieved starting with the simplest technology that is probably the hardest to install. 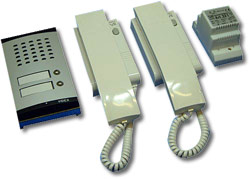 Wired systems are connected to each other with wires which have to be run from the home intercom handsets to the call module mounted at the gate.

This will obviously require laying wires in armoured trunking underground or in conduit along walls outside the property.

The alternatives to wired systems all use a communication technology that is wireless.

It should be remembered though, that even without the need for communication wires to the gate-side of the system, power still has to be supplied to the gate intercom. This would normally share the supply with the gate automation system.

Radio systems communicate in a similar way to transmitters and receivers used to open and close gate automation systems.

The control signals and voice and video data are transmitted at specific radio frequencies.

As long as there is no interference, this method of communication can be highly effective. In clear space with no buildings or trees or bushes in the way, DECT radio systems can have a range of up to 300-400m

Wi-Fi systems use an existing Wi-Fi network, or one specifically added for intercom communication.

Once connected to the local router via WiFi or ethernet, these systems usually connect on to the internet, allowing communication and gate control via an APP from anywhere in the world that data is available for your mobile device. 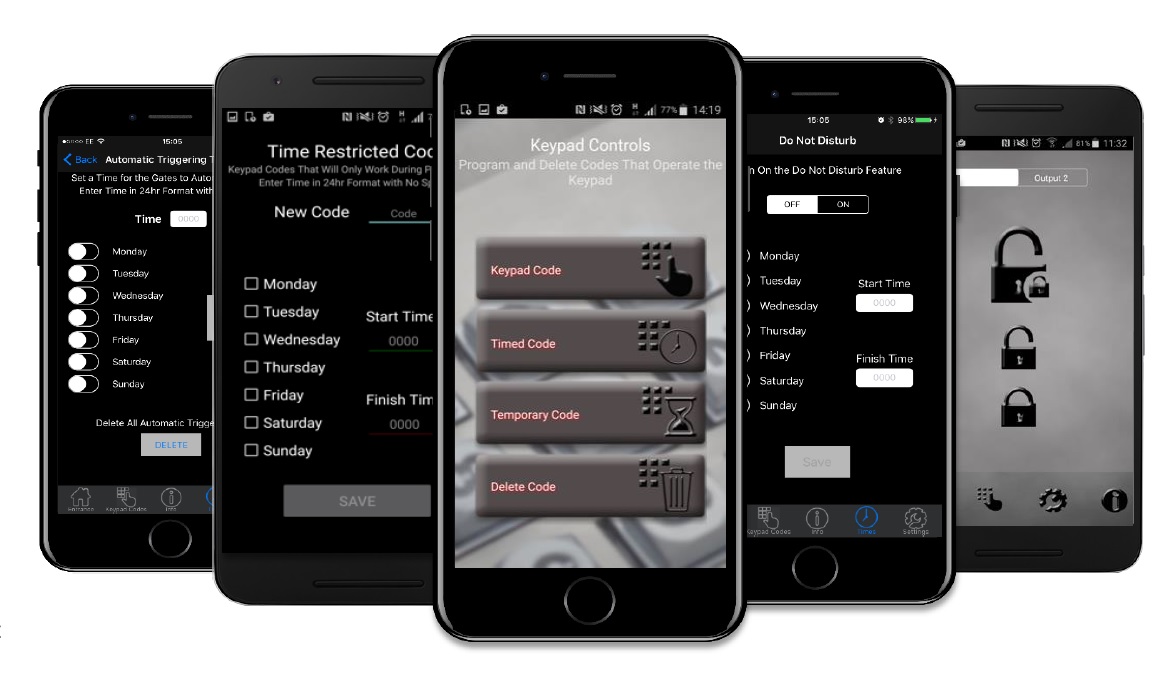 The most recent innovations in intercom communication use the same GSM communication used by mobile telephones. With a mobile app, your smartphone replaces the wall-mounted handset and door release inside the home.

It allows voice and video communication through the smartphone app as well as gate release.

GSM can even be used for communicating with and controlling your gates from anywhere in the world where you have a 3G or 4G signal (depending on the intercom system used).

However, as with a failed Wi-Fi signal, GSM intercom systems won’t work if your phone can’t access a GSM network where you are or if there is a break in the GSM signal at the gate end.

Wired systems provide the highest level of system communication integrity and can be wired considerable distances between the gate and house.

Radio signals sent be either the gate calling unit or house handset are usually robust but have a limited range.

Wi-Fi systems are limited by Wi-Fi signal resilience and strength and have range limitations unless connected by ethernet either direct or via a powerlink.

As with all local WiFi systems, it is important to be aware that most routers can support a limited number of devices.

GSM requires a good GSM mobile signal at both ends but can be used from anywhere in the world so offers the biggest range advantages.

Combined with other ‘smart home’ equipment and app-based GSM control, the ability to monitor and control systems in your home from another country is becoming more and more common but there is a security consideration.

This ‘internet of things’ where devices are controlled in the same way web sites are accessed on a mobile phone, needs strong passwords to ensure access is only granted by authorised users.

After all, what’s the point of having automatic gates that control who gets onto your property if they can be hacked?

At Linkcare we provide a wide range of manufacturers’ access control systems, components and accessories.

We also provide all customers with free technical, safety and installation telephone support. All trade installers are given a trade discount account, as we advertise our products at retail prices on our website.